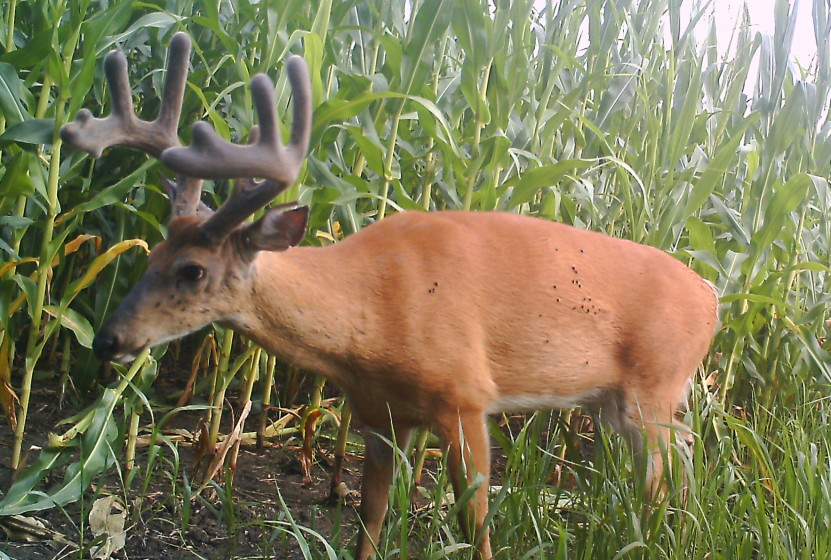 Of all the deer I have killed, the majority of them have been before November 5th.  With the weekend of November 6th right around the corner, a small sense urgency crept over me as I knew my busy season of work was about to hit

This giant was all over our cameras at this stand in 2015. He was the #1 target buck at this farm but we never could turn him up on camera or in person.

full swing and the “lock down” period  was right around the corner for the mature deer.  With temperatures predicted in the 40’s for the weekend, I was confident I was finally going to get my eyes on a mature deer.

November 7th (morning):  With my brother Elliott back in town from Wyoming, we woke up early and got into one of his favorite stands well before dark.  Cold temps had us anticipating movement throughout the entire morning, but after the initial push of does and small bucks at first light, the movement seemed to shut off.  This particular stand, which over the years has produced some giant deer (see pics), seemed to be out of whack this year.  The neighboring property had been sold to a new person who had done a lot of bulldozing, taking out several areas of thick cover, and this clearly had changed the movement patterns of the deer.  With 5 sits without much action, and nothing besides 3 ½ year olds showing up on camera, we decided to call it quits on that stand to focus our attention elsewhere.

Elliott has killed a lot of bucks out of this stand, including this giant 174″ stud in 2010

November 7th (evening): After running trail cameras all summer and getting numerous shooters on camera, I was having trouble wrapping my head around where they all could have gone.  Once again, a less than perfect wind had me sitting in a stand that I didn’t have a lot of faith in and once again I saw nothing but small bucks and does.  Even though it was November 7th, it seemed as if the it was still only the 2 ½ and 3 ½ year old bucks that were really up and moving.  In my head there were only 2 things that could be causing me to not see mature deer 1) they were pinned down in the thick stuff with a hot doe 2) only moving at night because of warmer temperatures and a full moon, either way, I was officially stumped.

November 8th (morning): With the clock in my head starting to go off, I decided to make an all -day sit.  The plan

1 of the 5 bucks that I saw cruising for does

was to hunt a certain set in the morning, and then when the winds changed around lunch, make the ¾ mile walk around the farm to another stand for the evening hunt.  The morning hunt took place in stand that had just been hung this year, which was located between 2 beddings areas.  The action was really good, with 5 different bucks cruising directly under me, but none of them were over 3 ½ years old.  I climbed down at noon, ate my PB&J, and headed to the other side of the farm

November 8th (evening): Although my luck had been pretty dismal up to this point, SE winds had me in a stand that we always see deer out of so I was excited for the hunt none the less.  A half hour after climbing into the stand, a  mature doe walked out at 100 yards in broad daylight, giving me the hope that movement was going to be early and often.  Twenty minutes after the doe disappeared out of sight, I looked behind me and saw a big deer at 100 yards heading right for me.

Immediately I knew it was a deer we called Baby Drop, and even though he was a deer we had considered passing at one point, there was zero doubt that if he came in range he was getting shot.  At 80 yards he had a decision to make, either follow the trail he was on and end up right in front of my stand at 30 yards, or take the trail headed north and skirt me at 70 yards.  Unfortunately he headed north, and with him moving further and further away, I ranged him at 71 yards and drew my bow.  With his head down feeding, he had no idea I was there, and I took an extra second to

This is baby drop minutes before I missed him at 71 yards.

take a deep breath, steady my pin, and slowly squeeze.  As I released the arrow, it seemed to disappear, but my gut feeling told me that I had missed.  The deer ran 30 yards, looked around, and then slowly walked back in where he had come from as if nothing had happened.  This terrible feeling crept over me realizing that after 22 hunts, I had just blown it on a mature deer.

Even though 70 yards is a long shot, it is a distance that I practice at every time I shoot and is a shot that I am very confident in, I had just simply missed.  Even though I blew an opportunity on a beautiful Iowa deer, I was able to maintain a “glass half full” mentality as I remembered my camera and the footage I had just captured.  I had self- filmed my first encounter with a mature deer on camera and was able to get incredible footage of him entering, the shot, and him leaving unscathed.  Overall, it was a great learning experience for me as I was able to learn a little more about what it was going to take to self-film myself killing a mature deer.