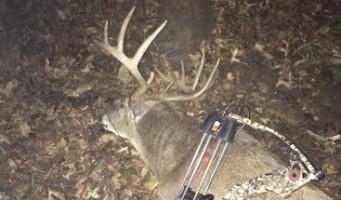 With several buddies coming into town for the Hawkeye night game against Minnesota, I knew I wasn’t going to be able to hunt at all on Saturday, which meant Friday was even more important.  Knowing this, I planned to hunt both Friday morning and Friday evening, and then figured I wouldn’t be able to get back in the stand until Sunday night (the 15th).  I was in uncharted territory hunting this late in the bow season, and was beginning to get nervous that I might not find one of the mature deer I had so many pictures of.  The morning of November 13th marked the 26th time I had been in a stand with my bow, and lucky for me, Friday the 13th was my lucky day to finally punch my tag.

November 13th (morning): Knowing that I was going to head south for my evening hunt, I chose to hunt more local that morning enabling me to get into the stand well before dark.  The morning was perfect with very little wind and temps in the 30’s.  After watching two small bucks funnel through at first light, I was alerted by the sound of deer running my way and looked up to see three bucks all chasing the same doe.  They ran by at 80 yards

This gnarly 8 pointer was my target buck on the morning of November 13th. I had dozens of pictures of him but couldn’t seem to get in front of him

disappearing for several minutes before I heard them once again headed back my way.  When I caught a glimpse of them this time, I immediately stood as I saw 2 big bucks now chasing the doe with the same three little bucks in tow.  Five bucks chasing one doe was one of the most bizarre sights I’ve ever seen!  They ran circles around my stand at around 100 yards until suddenly the doe got on a trail went directly underneath my stand.  I knew whatever was going to happen, was going to happen fast, so I decided to give up the filming and concentrate on killing one of these giant bucks.  The doe was in a dead sprint towards me, and as she closed the distance to under 40 yards, I drew my bow and watched the trail behind her.  The small bucks appeared first and right behind them was one of the big bucks. I wasn’t familiar with this buck but he had to be almost 23” wide and there was ZERO doubt he was a shooter.  As he sprinted towards me and closed the distance to under 30 yards, I began letting out grunts trying to get him to stop, which had no effect.  The big deer kept running, going directly underneath me, and causing me to spin around at full draw to try and stop him on the trail going away.  As he went under me I loudly yelled “Hey…….Hey” but unbelievably not a single deer stopped.  I’ve heard of deer getting “dumb” but had never seen a chase this intense before.

This was the smaller of the 2 big deer that ran under me. The giant one remains a mystery as I have yet to get a picture of him

I let my bow down heartbroken (which was a common theme on this day) and watched the deer run directly away from me until they stopped to catch their breath around 100 yards away.  When they stopped I finally saw the 2nd big buck again, one which I called Mr. Beams (picture below), and he was standing right next to the mystery deer that ran under me.  My heart sank even more as I realized the mystery buck dwarfed Mr. Beams, who I had guessed to score almost 160 inches. After a brief stop they started chasing again and disappeared for the morning.  As I sat there in my stand I replayed the scenario over and over and over in my head, but knew there was nothing I could have done differently.  Why didn’t they stop?  Where had that giant deer come from?   I climbed down from my stand thinking I had blown my final chance on a giant Iowa whitetail.

November 13th (evening): I couldn’t get the morning’s incident out of my head, but as I carried my climber on my back I had a heightened sense of excitement knowing that big deer were probably on their feet.  The wind wasn’t good for my favorite stand, but I really wanted to hunt in that same area so I took a climber in to get the wind right and went up.  Within 20 minutes of getting settled I heard the CRP rustling to my right and looked up to see a small 6 pointer headed directly towards me.  He came right in front of me, checked a scrape, and continued cruising right by me and out of sight.

As the small buck disappeared, I once again heard the CRP rustle and looked to my right to see a beautiful 150”

10 pointer headed directly for me.  Being in an unfamiliar tree, my camera set up was not great, and I knew I was going to have to let the buck cross in front of me and get on my left side before I would be able to film the shot.  I could have shot this deer numerous times at 15 yards on the right side of my tree, but wanting to get the shot on film, I sat there with my fingers crossed hoping he would do the same thing the small buck did.  He finally got on the trail to go in front of me and headed my way.  In the tree I had been forced to up in, I was extremely exposed, so the plan was to let the deer walk by me completely so I could draw without him busting me.  I sat with my release on the string as the deer walked in front of me at 7 yards, when suddenly he got a whiff of me, looked up, and bolted without any hesitation.  As he ran away I drew my bow and grunted loudly, hoping to stop him, but he didn’t stop until he was nearly 60 yards away and was completely covered by limbs and brush.  He really had no idea what had happened, but once again I watched a mature deer walk away without me even firing an arrow.

I don’t know if I’ve ever been more frustrated hunting than I was at that moment, and as I sat back down in my stand, I was 100% sure that I wouldn’t ever kill a deer on camera.  It hadn’t been five minutes and I was still clinching my fists with anger when I looked to my right and saw yet another big deer coming through the CRP to my right!  I quickly made a plan in my head, and again decided to try and let the deer walk all the way by me so I could film the shot, but chose to draw my bow when he was still 40 yards away.  I aimed my camera to the left to capture the kill shot and drew my bow, deciding that if he showed any signs of busting me, I was going to forego the camera and kill him.

This was my buck seconds before he whirled to leave. Unlike the first one however, he couldn’t get out of dodge quick enough

He took his sweet time as I sat at full draw with my pin on his heart.  After tearing up a scrape to my right  for what seemed like an hour, he began to walk on the same trail in front of me.  At 7 yards, in the exact spot the other buck had busted me, this buck all the sudden got a whiff of me.  Even though I was at full draw and he looked to be in the middle of the camera frame, there was one large branch blocking his vitals, so as he stopped and began staring at me, all could see was his neck and head.  He stared and stared trying to figure out what I was, and I knew that if I blinked or flinched at all with my bow he was gone.  After a stare off for over a minute, he slowly turned to leave from the way he had come in from.  Without any hesitation I leaned to the right of the branch and drilled him at 8 yards.  The arrow went through him so quick he had no idea what happened, and after bounding up the hill 80 yards, he stopped to look back and I watched him tip over!

I was overcome with excitement, fist pumping like Tiger Wood’s winning the Master’s, but there was a small sense of sadness as I thought the deer had walked out of the frame before I shot him.  I immediately called my brother from the tree to tell him the good news, and as I reviewed the film while we talked, I saw that I actually had captured the impact of the arrow!   Upon seeing the footage I was overcome with emotion and couldn’t quit shaking as I thought about what I had just accomplished.

It took 27 hunts to get it done, but I had finally self-filmed myself shooting a mature buck.  It certainly had not been easy, as I had to learn some things about self-filming the hard way, but at the end of the day I had got it done.  Like my grandpa always says “Patience and Perseverance pays off every time”! You can find all the footage from my crazy bow season online at anterathlete.com, enjoy!