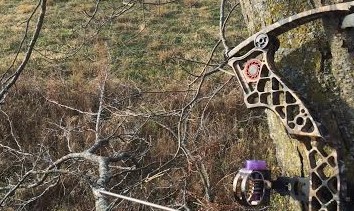 If I was going to circle a weekend that I absolutely must be in a tree, it’s the weekend surrounding Halloween.  This year the 31st fell on a Saturday, making it easy for me to take a three day weekend and put a lot of time in the stand.  Historically, I have killed the majority of my bucks between the 10/28 and 11/4, with Halloween and November 1st

being my two favorite days.  This year my favorite weekend was plagued by warm weather, slowing the action down considerably, but still allowing me to fill one of my tags.

October 30th (evening)- SE winds allowed me to sneak into one of my favorite stands located in a pinch point between multiple CRP pockets where deer are bedded.  Due to warmer weather, movement was extremely stagnant, with most of the does appearing just before dark.  Even with the late movement, 2 small bucks emerged and chased the does around the field like they were the kings of the property.  I snuck out without being detected and knew it was just a matter of time before a mature buck came out to check those does.

Halloween (morning)- With temps dropping slightly over night, I thought I was in for a good morning hunt.  It turned out to be my most disappointing hunt of the fall, with me sitting until noon and barely getting a glimpse of a squirrel.  Sitting in a stand that was in a travel corridor between bedding and food, the only thing I could attribute the slow movement too was that the deer had sensed the warmer weather coming and had beat me back to their beds.

Halloween is always one of my favorite nights to hunt. This was my 2014 Halloween buck.

Halloween (evening)- Straight west winds had me pinned in a stand I didn’t have much faith in, but this stand allowed me to get a good vantage point on a farm that I didn’t have a lot of experience hunting.  Temps reached nearly 60 degrees Fahrenheit, and similar to the previous night, movement was restricted to the last half hour before light.  A 3 year old eight pointer (trailcam picture) popped out several hundred yards away just before dark, but overall it was another very slow night

November 1st (morning) – I’m not one to leave a stand early, but with temps above 60 at 8am, it didn’t take a rocket scientist to realize that deer movement was going to be hard to come by.  My brother has killed 5 bucks out of the exact stand I was in, 3 of which were on 11/1 and 11/2, but it was not meant to be in 2015. I climbed out of the stand around 10am to go home and re-evaluate my plan for that evening.

November 1st (evening)- SW winds were going to force me into a stand that I didn’t think gave me a great chance at a mature buck, so when a buddy called and asked if I wanted to sit a random stand on a new farm he got permission on I was all in.  I went up in a climber on a point that stretched into a cut corn field, and upon getting up, I was immediately surrounded by deer.  After watching several does enter the field just out of range, I heard leaves rustle behind me and turned around to see a doe stepping into the field 15 yards away.  With a Van Buren doe tag in my pocket, I saw this as the perfect opportunity to capture my first self-filmed bow kill on camera.  I got great footage of the doe emerging from the timber, and with her reaching 30 yards, decided it was time to fill the freezer.

Slow November movement made it the perfect time to fill my doe tag. As you can see by the photo, which was taken seconds before I made the harvest, this doe had an open wound on her side. This doe had clearly been caught in a barb wire fence not long before entering the field as the wound was fresh and still bleeding.

A perfectly placed slick trick zipped through the doe at 33 yards and she barely made it 50 yards before piling up.  Even though I’ve killed countless deer with a bow, that familiar adrenaline rush immediately rushed over me as I realized I had just successfully harvested a doe on film.  I immediately ran through the footage on the small screen and saw that I had captured the shot perfect.

Within 5 minutes of killing my doe, more deer started pouring into the field, including a small buck that ran 2 young does in circles around the field for nearly a half hour.  Suddenly, the deer started blowing and left the field.  Uncertain of what had caused this reaction, I suddenly saw a big coyote trot over hill and he was headed right for me.  With the coyote only 75 yards away, he got the wind of my dead deer, and made a bee line directly for the carcass.  I swung the camera out in front of where I thought he was going, drew my bow, and let out a grunt to stop him at 53 yards.  I watched the arrow fly inches in front of the coyote, and he immediately bolted back to where he came from.  Thinking I hadn’t got the shot on film, I was pleasantly surprised to check the footage that night and see that I actually had got the shot on camera, and you could clearly see the arrow miss right in front of the coyote.  Overall, I saw 14 deer (2 small bucks) and the 1 coyote, and was able to successfully self-film my first tag getting punched of the 2015 bow season.