After 10 days of hunting with a camera, this... 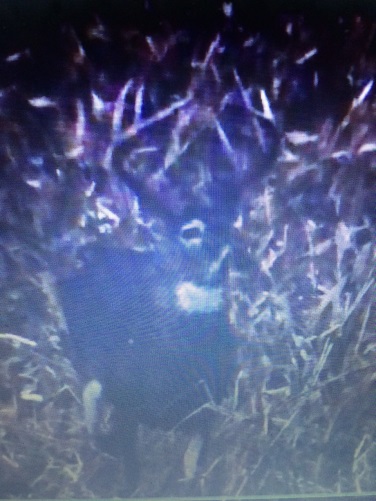 Having taken a week off of work to make my first trip to Montana to chase elk, I knew I was going to have to be a little pickier on when I would be in the stand chasing whitetails.  After hunting the opening weekend, I promised my wife I wouldn’t get back in the stand until the weekend of the 24th, and with the weather about to change, it turned into a great weekend of hunting.

October 23rd (evening): The rare SE wind was upon us in SE Iowa and that allowed me to sneak into a stand that I hadn’t been in yet.  Deer movement started early, around 5:30 pm, with some does appearing followed by two small

bucks.  The small bucks chased the does in front of me for over an hour, grunting and carrying on like it was the peak of the rut.  That was one consistent theme over the weekend, the young bucks thought it was “on”, and the mature bucks knew it wasn’t.  Right at dark that night I had a nice 3 ½ year old appear out of the CRP and ended up coming within 10 yards.  He’s a pretty buck with decent genetics but clearly isn’t mature enough to

October 24th (morning):  The cold front that was supposed to take place over night decided to wait until almost 10 in the morning to begin.  Due to this, it was 65 degrees when I was walking into the stand and  I barely saw a squirrel let alone a deer.

October 24th (evening): My best buddy Nick came out with me to film, and with the temperatures dropping, we thought we should be in store for a good night.  NW winds had us on the edge of a draw where the “big 7” was living but he never appeared.  Similar to the night before, we saw plenty of movement, with small bucks chasing does all around us, but no mature deer.  I was getting reports of mature deer on their feet, due to the cold front, but showing no signs of the rut yet.  With crops still in around the farm I was hunting, I knew it was only a matter of time until we ran into one of the mature deer we were after.

October 25th (morning): I usually refrain from hunting mornings in October, but with the cold front having moved in, and my wife in Minneapolis, I was perfectly fine with waking up early to see if the deer were moving.  Unlike the previous morning, this morning was cold (38 degrees) and the deer moved from the time I climbed up until the minute I climbed down.  I had a mature 140 inch deer walk by at 30 yards right after I climbed up, but with no camera light and much bigger deer on camera, I let him walk.  I saw another mature deer that cut behind me at 150 yards but didn’t see anything besides a quick flash of rack.  I ended up seeing 13 deer, almost all which came within bow range, and once again the two small bucks I saw (spike and 6 pointer) chased the doe’s as if the rut was in full swing.  I also had 8 turkeys grab a drink in front of me in the creek, a

dozen wood ducks swam up and set up camp right underneath me, and I came to full draw on a big coyote but when I whistled to stop him he bolted.  All in all it was an awesome morning in the woods that reminded me how much I love being up in a tree.

October 25th (evening):  With another rare east wind upon us, I decided to try a new stand which we had hung

that summer in hopes of running into a giant 8 point we called “Angus”.  With temperatures once again increasing (63 degrees), deer movement was minimal.  Several doe’s funneled by me right before dark, but no bucks were to be seen.

The movement is clearly beginning to start, but the mature deer will be moving much more in 5 days.  With another cold front looking to set in (October 27th), I believe October 28th-November 2nd may be your best bet (in SE Iowa) to get on a big deer.