After 10 days of hunting with a camera, this is what I know 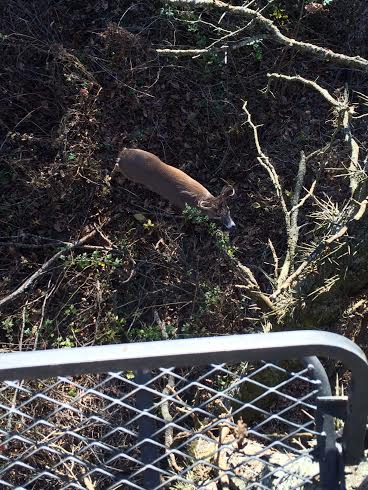 After having some luck and harvesting several big deer with my bow the last couple the years I decided it was time to try and get it done on camera.  I have several friends that have just begun to film their own hunts as well so I figured we could all go through the learning curve together.  After 2 weeks of hunting, it is very clear that carrying a camera while bowhunting changes the game completely.

Before actually attempting to kill a deer on camera, I had grandeurs of a 180” inch deer stopping broadside at 20 yards and me sending a broadhead through his pump house on film and becoming the next Lee Lakosky overnight.

But then I had a realization, who is going to film this? With all of my hunting buddies still having tags in their pockets, they weren’t going to do it.  Both of my brother’s would love to help but don’t have time.  I don’t feel safe with my little sister being above me at 25ft.  Self-filming here we come!

I’ve self-filmed and used a cameraman thus far and they both have flaws.  With a cameraman, you have twice as much scent, movement, and noise as you normally would.  You also are in different stands (most likely at different heights) so your point of views are not exactly the same, which can cause confusion during a shot if you don’t  have pre-determined spots to record the kill shot at.  Another problem I’ve ran into with a cameraman is having the right tree for both of you to be in.  I tend to push the limits with the trees I put stands in because I like being in the right spot rather than the perfect tree.  Due to this thinking, most of my stands are not in trees that are well suited for another stand being hung above it.  We have made due thus far with climbers, but the plan is to reevaluate all of my tree stands/trees next spring.

While it may seem difficult with a cameraman, self-filming has proven to be even more of a challenge.  The difficulties begin with a simple fact: you can’t shoot and film at the same time.  To solve this problem, a tree arm can be implemented to hold your camera while you execute the shot.  While a tree arm is certainly useful, getting it lined up with exactly where the deer is can be tough.  Yes, if a 200” inch deer walks directly down the path you think he’s going to, stops at 20 yards in your perfect shooting lane that you’ve planned, and says “shoot me”, the tree arm would work perfect.  In reality, a tree arm can work if you do a lot of homework beforehand.  Things such as shooting lanes, potential trails, and stopping points (scrapes, scent sticks, food) must all be examined and planned for to give you the best chance possible.  I would recommend getting a camera arm with the longest reach possible, which will give you more maneuverability if a deer doesn’t follow the script.

As far as camera choices go, there are many.  From $100 to $5,000, and everything in between, you can spend as much or as little as you’d like.  I chose to go with the Sony FDR-AX100 which is a hand held, 4K camera, that can do almost everything a professional camera do without as much bulk.  I chose the 4K camera because I knew I could potentially be filming myself.  The reason 4K is import is because it allows you to stay zoomed out further (larger field of view) and then while editing you can zoom in with nearly the same clarity.  This obviously helps someone who is trying to film themselves because there is a larger frame for the deer to be in while trying to make the shot,

Unfortunately you will get to see me miss this beautiful buck on camera. Bringing a camera helps catch all of the up’s and downs of a season and makes a successful harvest that much more rewarding.

but you can zoom in afterwards to show impact shots.  After several hunts and nearly an hour of footage, I continue to be impressed by how clear the 4K is.  You can see every detail on any animal within 150 yards, and can actually serve as makeshift binoculars for animals further out.  One thing that is consistently going to be a struggle is the amount of daylight needed for the camera.  Anyone who whitetail hunts knows big deer tend to move the last 10 minutes of light, which is usually too dark for the camera.  I would rate my camera at an 8/10 on picking up light, and actually have been pleasantly surprised by how well it has done in low light conditions.  In a field edge setting,

my camera can adequately film within 10 minutes of the last possible minute I could see my pins.  In the woods, which obviously get dark quicker, my camera can adequately film up to 20 minutes before I can see my last pin.  If you spend more money on a professional grade camera this ability to pick up light will get better, but I have compared mine to several cameras that are $5,000+ and the difference is much to marginal to justify the additional $3,500.

Overall, filming a successful bowhunt has been a challenge, but is something that I would encourage everyone to try.  It adds an element to the game that involves even more preparation, which will not only make you a better hunter, but also provide even more satisfaction upon a successful kill.  Regardless of my success on camera this fall, I am continually storing memories on my computer that I will cherish for years to come.

» HUNT, Skill » After 10 days of hunting with a camera, this is what I know